Our Battle With The Beast

50 hours and 1550 miles later, we arrived back to Michigan. Mother Nature threw everything she had at us. One wall of weather after another.

Our day started on Saturday April 6th in the late morning. It was a beautiful sunny Florida day. After spending the week promoting our Sling aircraft harnesses and panels with The Airplane Factory we left the Sun N Fun fly in at Lakeland Linder Regional (KLAL) to try and get home ahead of a system going through Alabama toward Georgia. A nice tail wind should get us home in just under eight hours. Everything was going as planned, 140 kts – 145 kts across the ground just as predicted, sunny skies, relatively smooth air, then it all changed. We crossed over the Florida border and into Georgia where we faced the long line of storm cells that awaited us. Radar images painted a very different picture than what was forecasted just hours before. As we flew closer we were consistently monitoring the weather trying to get all the information we could.  I can tell you that I will never trust the ADS-B cloud tops report, as it told us that the tops around the cells should be around 9,000’. Upon climbing to 12,000′ we quickly realized that this was not the case. After coming to the realization that we were not going to be able to out climb the growing cloud tops ahead of us we found a clearing below and descended to land at Valdosta Regional (KVLD) where we were greeted with a friendly staff cooking burgers and dogs for the pilots making their way north from the fly in. We huddled with the other stranded north bound pilots studying the weather trying to devise a plan to continue north. 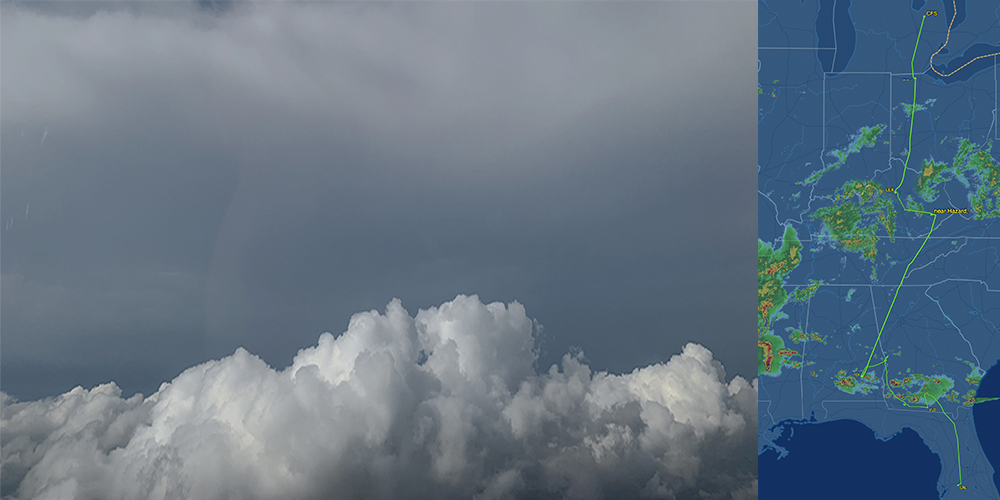 Dodging the storms and low ceilings took a lot of maneuvering.

All I knew is that it seemed dark ahead, I had a strange feeling that something wasn’t right……It didn’t take long to realize that we were headed straight into the belly of the BEAST!

After a few hours we saw a possible break in the weather on the back side of the first line of storms and the front side of the next. With careful consideration we took off from Valdosta and headed west. After successfully splitting the two cells and making some progress north we once again hit a wall of low lying clouds. We maneuvered every which way trying to find a way around which proved futile. Exhausting all options we decided to double back to land for the evening.  The weather was quickly changing and the clouds had us down to about 1,100 above the ground. I asked my fellow pilot to plot a course to the closest airport which he did. Troy Alabama (KTOI) here we come. The AWOS was reporting 10 mile visibility and 3,500’ ceilings, so it seemed like the place to go. The rays of sun started shining through a hole in the upper layer mixing with the haze making it tough to see. All I knew is that it seemed dark ahead, and I had a strange feeling that something wasn’t right so I asked to have the radar image pulled up to see what was ahead of us. It didn’t take long to realize that we were headed straight into the belly of the BEAST! a large storm cell was right in our path so I diverted to the west and set course to a smaller airport on the west side of the storm cell. Upon our arrival we could see the wall of intense rain and lightning that had just moments ago engulfed the small rural airport moving off the the east leaving a higher ceiling and good visibility allowing a straight shot to Troy. Figuring that we might have more options after landing, we made our way south.  This is the moment I realized how incredible the G3X system really was. The wealth of information available is extremely calming, radio frequencies, terrain, towers and radar images were a few of the things that made it possible to safely find our way to Troy where we decided to call it a night.

The next morning came and the clouds lifted just enough for us to head north once again. After about 30 miles we found clear skies and continued on toward Knoxville Tennessee (KTYS). While en route we were watching the next system promising to challenge our decision making process. With a 40 knot tail wind we knew we could stay in front of it until at least Knoxville, which would be the point at which we would decide what course of action we would take next. Upon reaching Knoxville and studying the METARS north and east, we made the decision to head Northeast to parallel the line of weather and take advantage of the 145 knot ground speed to get us out in front of it, which actually seemed to work. Flying around the front side we made the turn north toward VFR conditions and unlimited visibility. We were home free!!! Yeah, right!!! Mother Nature once again stepped in to humble us.

No problem! Except for the Lane A light that started flashing on final……Making a landing in Hazard was even more critical as diverting now was not really an option!

In just a few minutes our horizon turned into shafts of rain hitting the hills of Eastern Kentucky, once again putting up a impenetrable wall. 18 miles to the West was an airport on top of the hills of Hazard Kentucky (KCPF), so we changed course and headed toward Hazard. Turning west meant that the 40 knot tail wind we were enjoying became a 40 knot headwind which made getting there a slow process. About 15 miles out, we could see another rain shaft coming down to the west of the airport and we knew the race to get there ahead of the rain was on. As we flew closer so did the rain making it seem like a lifetime. At last we were on final for 32 and the rain was on final for 14. Keeping up forward speed we were confident we would be able to touchdown before being engulfed by the rain. No problem! Except for the Lane A light that started flashing on final, why not add another  piece to the equation? Why not give us one more kick in the gut? Making a landing in Hazard was even more critical as diverting now was not really an option, but we had no time to worry about that, we just needed to land on top of the 1,400′ plateau before the rain did. We touched down and taxied to the ramp just in time for the rain to start falling.

We Just Beat The Rain In Hazard Kentucky

After taking a tour of the city of Hazard, we decided to study the weather to find our options. There’s nothing wrong with Hazard, the kid working at the airport was polite and  helpful, they also had a courtesy car but there wasn’t much in the way of resources so if continuing on was an option we wanted to take advantage of that. The weather at the airport was improving and once again we had VFR conditions that extended to the west with a line of weather to the north. We got back to the airport looking to set off toward Corbin Kentucky to see if it would be possible to get behind the system and get flying in the right direction. We fueled up and began to  trouble shoot the lane light issue we had while landing into Hazard. After shutting down and restarting the problem did not repeat. We did several lane checks and determined that everything was functioning properly then proceeded to position the plane on runway 14 to takeoff from this plateau in Hazard before turning toward Corbin Kentucky (KLOZ). Now battling a 50 knot headwind with nothing but foot hills below with no places to land, we were slowly making progress, carefully monitoring the engine instruments and lane lights for fault indications all while watching the weather to the north for any changes.

Upon our initial descent into Corbin we noticed that there was good visibility to the north on the backside of the weather system, so we aborted our approach and headed to Lexington Kentucky (KLEX) for a thankfully uneventful arrival. We decided we had enough excitement and chose to spend the night in Lexington. 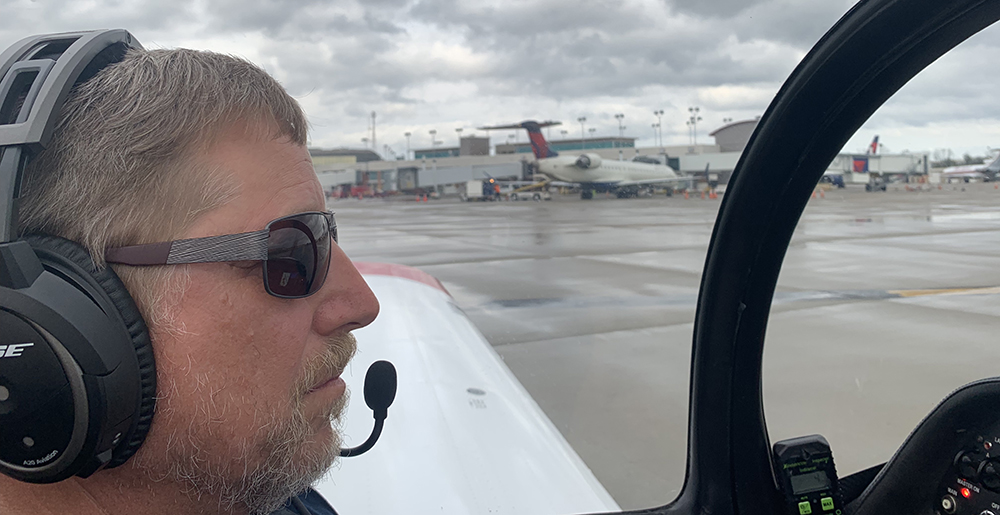 We got there, handed them the keys to the rental and ran out to the airplane as the rain started to lightly fall. We felt like fighter pilots scrambling to their jets to intercept the enemy!

The next morning we awoke early to see what we had to face on this new day. Did the weather gods decide to give us a break? HELL NO! There was a huge cluster of crap about an hour to the southwest that was headed right for us. We called up TAC Air and asked them to have the plane ready as we rushed to the airport. We got there, handed them the keys to the rental and ran out to the airplane as the rain started to lightly fall. We felt like fighter pilots scrambling to their jets to intercept the enemy! We quickly inspected the plane, got our clearance, taxied to the runway and off we went, turning northeast to once again to escape the far reaching grasp of Mother Nature.

After 20 miles of flying low we were in the clear. Could this be the last challenge we would have to face? It sure seemed like it. We passed Cincinnati to the east and up through Dayton enjoying the sun coming through the canopy. Even Toledo seemed to be enjoying VFR conditions. Michigan was battling some IFR and marginal conditions with low ceilings that were forecasted to lift, so it seemed like we may have finally escaped! Not just yet! Mother nature wanted us to visit one more airport. About 50 miles south of Toledo, clouds started appearing, and a ceiling was formed forcing us to once again fly low. We forged ahead north and landed in Toledo (KTOL) for another airport tour.

Upon seeing my favorite coffee place, I knew I was close to home.

We grabbed the crew car and headed out for breakfast. I knew we were close to home when I spotted my favorite coffee spot, Tim Hortons, so close yet so far. Only a one hour and ten minute flight around Detroit’s Class B would get us home, yet we were grounded until conditions improved. After eating breakfast and doing some shopping we headed back to the airport. With the ceilings starting to lift and VFR conditions appearing in Michigan, we made the decision to head toward Michigan. Leaving Toledo we had 2,500 ceilings, flying low once again until we crossed over the Michigan border. The cloud layers were dissipating and we got to see the sun again! We climbed up to 5,500′ and made our way around the Class B heading toward home. The low cloud layers ahead seemed to lift and part as we flew north. What was marginal a few minutes ago was now clear, as if Mother Nature was saying “you guys earned it, I give up, you may now go home!”

The one thing I can say for sure is that the Information we received from the Garmin G3X system was priceless. Being able to see the weather, traffic, airport information, terrain and obstacles gave us an unbelievable amount of situational awareness that we could have never achieved with the old steam gauge and chart set up. The information available is nice to have even when conditions are good but I have never appreciated it as much as I did on this trip. 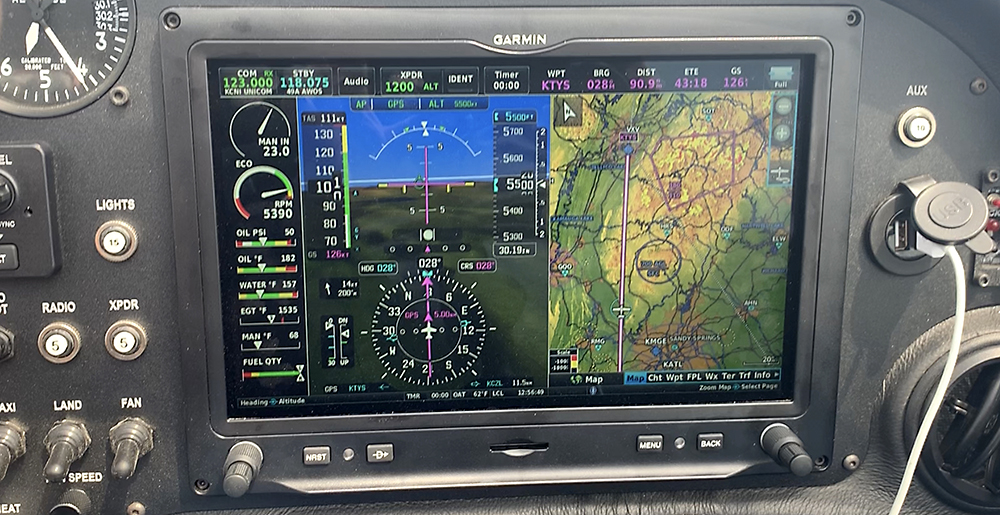