A Little About Us

To formally introduce our selves, we are Steve O’Connor and Adam O’Connor, the father son team behind Midwest Panel Builders a family owned and operated company. Steve O’Connor is a former partner of Midwest Sky Sports, while Adam O’Connor headed up the avionics department. Now both have moved on to dedicate themselves to offering the very best in experimental aircraft avionics, harnesses and panels, specializing in the Sling lineup of aircraft by The Airplane Factory. We look forward to helping you design and build your system!

To build you the safest most reliable avionics system with a focus on detail, providing unparalleled form, function and style to offer you a panel that you can be proud to show off  while helping to make your build process quicker and smoother.

Get a look at the process we use to build high quality panels and electrical harnesses.

Inspiration is a very powerful motivator, it’s what drives greatness, inspiration can come from many different sources however we are most inspired by the words of those who we see as similar to our selves that have achieved greatness. With that in mind here are a couple quotes from two great thinkers that we use to inspire us.

We love this quote because without imagination it would be impossible to dream up new ideas and ways of making our products better.

Another quote from the late Steve Jobs, wether you liked his products or not, he was a very driven and motivated person and much can be learned from him.

Steve Jobs was definitely one of the great minds who also had an incredible imagination and an ability to know what his customers wanted, before they knew they wanted it and he made it very clear that quality was of the utmost importance to giving the customer the best user experience.

The following excerpt from Steve Jobs biography is a look at the lessons he had learned about quality from his father, this is another example of the inspiration we use to deliver the best product we can.

“I thought my dad’s sense of design was pretty good, because he knew how to build anything. If we needed a cabinet, he would build it” Jobs said that his father refused to use poor wood for the back of cabinets, or to build a fence that wasn’t constructed as well on the back side as it was the front. Jobs likened it to using a piece of plywood on the back of a beautiful chest of drawers. “For you to sleep well at night, the aesthetic, the quality, has to be carried all the way through.” Jobs would say that just because you can’t see the inside does not mean you should sacrifice quality.

These are just a few examples of how we use the experience and greatness of others to inspire us and help us to define our core values as a company.

How It All Began.

My name is Steve OConnor and I will give you the rundown of what got us here. The story can really be traced back to the mid 90s, I remember sitting at the Romeo (D98) airport watching airplanes working the pattern, I was at the point in my life that I could finally afford to fulfill my dream for flight, and at this moment I decided it was time to go for it. I found an instructor at another close by airport who was advertising a Cessna 150 for $45 per hour wet and instruction for $25, (times have definitely changed since then) and I followed through to obtain my Private Pilot license. 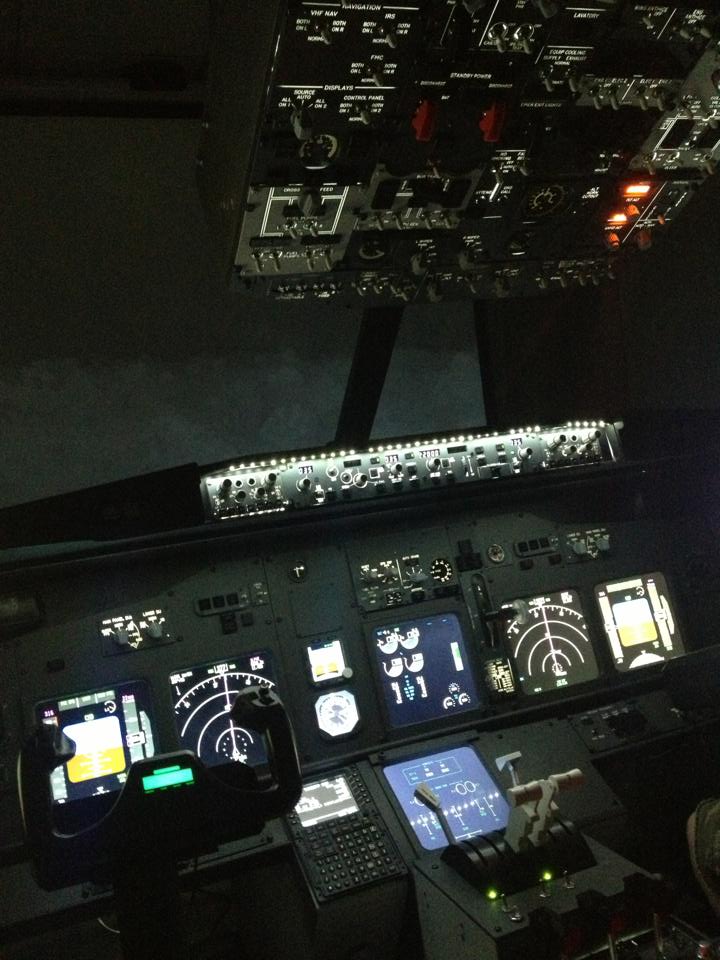 The 737-800 simulator that rekindeled the passion for aviation.

Fast forward quite a few years, the flying had been sparse since having a family as happens with many pilots. The one major difference is that I had a son who was really heavy into the flight simulator world, putting together his own little cockpits and flying around the virtual world. Seeing his enthusiasm for these simulators I decided that him and I would go larger scale and build a full sized simulator. After some research we finalized our plans to build a full scale static Boeing 737 simulator. With a lot of help from the huge simulation community we stated collecting all the different computer cards and modules that would allow us to connect our components to Flight Simulator. Who knew that this was the beginning of our great journey.

Soon after the completion of the simulator, I decided it was time to take flying more serious, it was time to do more to promote aviation, so I decided to become an instructor. I set out on a course over the next year and a half, starting with my instrument rating, I moved on to commercial, CFI and finally my CFII at which time I decided to partner in a flight school in Lapeer.

A few of my many hobbies include photography, graphic and web design as well as marketing. I used these to help build the flight school into a thriving training center introducing many new pilots to the world of aviation. Taking notice of the speed in which we built our name, a local aircraft builder approached me to talk about joining forces to start a new business, the new business would be building and assisting in the building of experimental aircraft, this was the birth of Midwest Sky Sports. We started looking at the different manufacturers to decide which ones we wanted to work with when we stumbled upon a newer manufacturer producing a 2 and 4 seat airplane named Sling. After some research and some flights, we decided that this would be the aircraft we would stand behind. I started the marketing for this company immediately, making videos and a lot of advertising campaigns and built the company into awell  known name in the experimental aircraft world.

One of the hurdles we faced building the Sling was no different than that faced for most home builders, the Avionics. This is where we introduce Adam O’Connor into the story, Adam at this point had a little experience in avionics but had been building and repairing computers for several year and had extensive knowledge in electrical and electronic, After all we built a full size 737 simulator by this time.  Adam insisted that this was a challenge he wanted to take on and convinced me to try him on. I instructed him to research what was needed to equip our first Sling build and cost it all out, he would need to produce a plan to build this system to include diagrams and layouts, component placement power requirements and all supplies required, he handeled it like a pro and we indeed gave him the responsibility of building our first system.

One system became 2, 2 became 3 and so on, with each new system he refined the process to become even better. Learning more about the system, Adam was able to integrate more options that are not normally offered by other shops making our offering much more unique. Adam started working with Garmin to build relationships and gain access to training to hone his craft, and hone it he did.

In early 2019 after some differences in vision for Midwest Sky Sports, I decided to depart the company, however I knew this would not be the end, it became very apparent that we had a product to help builders with one of the most complex parts of their builds. Adam and I decided to start a new company focused on the avionics and electrical systems of the Sling aircraft for the home builder. With our extensive knowledge of the Sling aircraft and our proven process, we offer a product no one else can quite compare to.

GET YOUR PANEL AND HARNESS STARTED TODAY!
Get A Quote